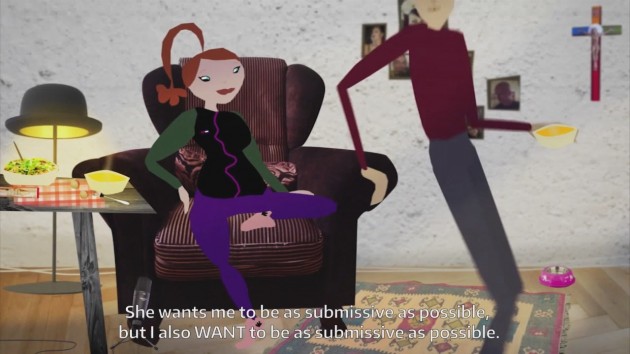 This year at our Nachtschatten BDSM/Fetisch Film Festival, one film particularly stood out: “Vanilla Whip”, an excellent documentary about the BDSM scene in Poland made by young film maker Bogna Kowalczyk. The film rightfully won the “Honorable Mention Award for Best Documentary 2018” at our festival. Not only does her film portrait various people with their different opinions and approaches towards BDSM and kink, but Bogna realized this in a very unique and compelling way, with outstanding animations of different types and styles that truly have to be seen!
Here is the trailer for it: https://vimeo.com/143363132
Unfortunately, for audiences to actually see the film proved to be a problem, with no easy distribution and access and promotion. Facebook is constantly shutting her down when she tries to promote the film because of its “adult nature”. So she decided to do a bold move and release the film to the public, free for everyone to see, and hopefully generate some followers and fans for her film and also herself this way! For this she created a virtual Facebook event for November 24, where she will then post the link to the film on the event page. If you are interested, please like her page and attend the event on FB (no “physical” presence necessary) to show Bogna some appreciation about her wonderful work and get it to be known by more people:
https://www.facebook.com/events/2201715073376088/